What Weight Medicine Ball Should I Get?

September 29, 2021
As well as fitness levels, gender, and age, we will look at the optimal medicine ball sizes. Let's quickly review what medicine balls are and why they're a great training aid (read also best medicine balls for crossfit ).   Exercise or medicine balls are solid weighted balls that range in weight from 1 to 50 pounds. They range in size from a baseball to a basketball. The medicine ball's shell might be nylon, vinyl, kevlar, leather, polyurethane, or dense rubber. Hippocrates reportedly had stuffed animal skins for patients to throw around for medical purposes during the age of pericles (around 400 bc). The medicine ball may be the world's oldest piece of exercise equipment.   Medicine balls were widely used in the late 19th and early 20th centuries. Medicine balls are now in every gym and athletic training center. They are incredibly powerful training tools.   Ballistic training, core and rotational training, and rehabilitation use medicine balls. In sports medicine, med
Post a Comment
Read more

September 29, 2021
Resistance bands , often known as exercise bands, are a cheap and easy way to build muscle. With resistance bands, you can execute practically any strength workout, including a lat pulldown, which is similar to a pullup. The use of a resistance band pulldown instead of a pullup has benefits and downsides. Resistance bands Resistance bands are long, flexible tubes used for resistance training. A band is 3–6 feet long. Some resistance bands feature handles on both ends, others do not. Resistance bands are color coded. In general, darker colors have higher resistance; lighter colors have lower resistance. A shorter band resists more than a longer band.   Pull-ups bar Pullups are done with a bar and your own body weight as resistance. Grab the bar with either hand and pull up until your chin touches or passes the bar. The pullup works the latissimus dorsi, biceps, rhomboids, and trapezius muscles in the back and arms. You can modify the exercise's feel by adjusting your grip.   Pulling
Post a Comment
Read more 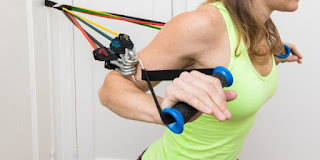 Weighted resistance tubes and bands are becoming increasingly used as rehabilitation and training tools. They are used to build muscles. Resistance tubes and bands have comparable uses. Both can be used interchangeably, but there are several major differences. The Difference Between Resistance Tubing Vs. Resistance Bands Dimensions The two training tools' names derive from their distinct shapes. Resistance bands are flat elastic pieces several inches wide. Resistance tubes are made of spherical elastic with a hole in the middle. Most tubes are under 1 inch wide.   Handles, Handles are another major difference between the two. Handles can be found on both bands and tubes, but are most common on resistance tubes. Resistance tubing comes with a variety of handles. Some are permanently linked to the tubing, while others can be removed and moved. It is difficult to include a handle on resistance bands because of their wide flat orientation.   The price Cost varies widely depending on b
Post a Comment
Read more